Definition: Perspective drawing is a system of representing the way that objects appear to get smaller and closer together, the further away they are.

Imagine driving along a very straight open road - the road, the fences and power-poles all diminishing towards a single spot far ahead of you. That's single-point perspective. Single- or one-point perspective is a simplest method of making objects look three-dimensional. It is often used for interior views or trompe l'oeil (trick-the-eye) effects. Objects must be placed to that the front sides are parallel to the picture plane, with the side edges receding to a single point. 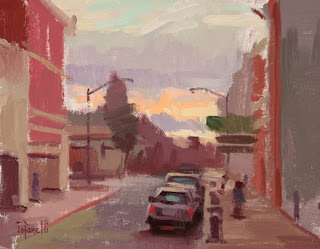 Is that the same as Linear Perspective?

When we talk about perspective drawing, we usually mean linear perspective. Linear Perspective is a geometric method of representing the apparent diminishing of scale as the distance from object to viewer increases. Each set of horizontal lines has its own vanishing point. For simplicity, artists usually focus on correctly rendering one, two or three vanishing points. 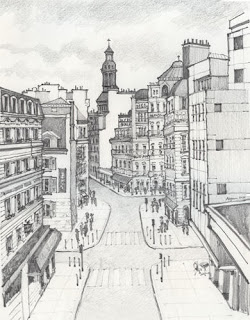 In one-point perspective, the horizontals and verticals which run across the field of view remain parallel, as their vanishing points are at 'infinity', with horizontals which are perpendicular to the viewer vanish towards a point near the center of the image.

In two point perspective, the viewer is positioned such that objects (such as boxes or buildings) are viewed from one corner, so that two sets of horizontals diminish towards vanishing points at the outer edges of the picture plane, while only verticals remain perpendicular. It is slightly more complex, as both the front and back edges, and side edges, of an object must be diminished towards vanishing points. Two-point perspective is often used when drawing buildings in the landscape. 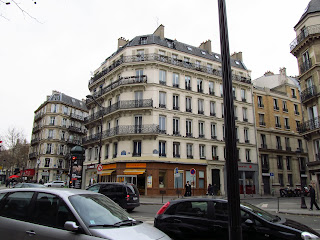 In three point perspective the viewer is looking up or down so that the verticals also converge on a vanishing point at the top or bottom of the image. 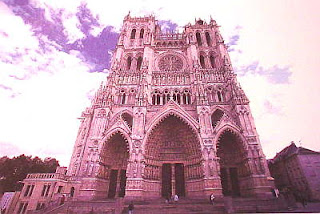 Atmospheric perspective is not linear perspective, but rather attempts to use control of focus, shading, contrast and detail to duplicate the visual effect of near objects being crisp and clear, while distant objects may be less distinct and muted.